A boy was born in 1743 on the Coast of Guinea. This is what he wrote in his letters in the last years of his life. His family came from the south of Mali.  Later I will tell you how I know this. It is unknown how his parents named him, my curiusoty about this, started this whole project.
When he was little child, he was stolen by people of Guinea. This is in the letter of his daughter in 1830. Her father must have told her that, what could she have know about the situation there.

On 28th of February of the same year, a princes was born. Her parents, William IV, Prince of Orange, Stadtholder of the Netherlands, and Anne, Princess Royal, daughter of King George II, called her Carolina. Her grandmother was from Hessen Kassel, Maria Louise. For Carolina the laws were changed so she could be heir of her father until a male child was born.

In Elmina, the Dutch fort on the coast of Guinee, Jacob de Petersen, Director General of the WIC, resigns in 1746. He is not longer allowed to make personal trade and that is probaly a reason for him to leave.
On 10th of April 1747 he embarks on the ship Watervliet, to sail to Suriname where he arrives on 19th July. The 12th of August he leaves Suriname on the ship La Jalousie, with him are his servants. They arrive in Texel (The Netherlands) on November 11th.

It is 1748, April 20th. The princes is now 5 years old and has a little brother William, who is just baptised. He, but also she, receive presents.

Someone, still unknown who, gave her “two little African Mohr’s and an expensive hammock from the same continent.”
I have read all the letters Willem IV wrote his mother in this period and he does not mention anyting about the gift of the boys for his daughter. Maybe it is because he had an African servent too for a long time, named Rabo.

One of the boys dies in a year’s time. His name was Fortuin. 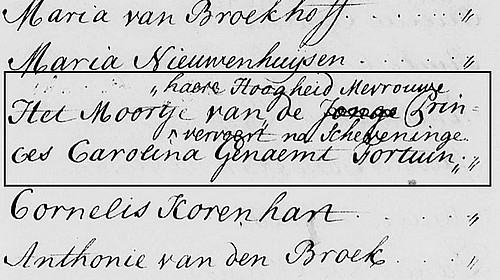 In 1760 Carolina marries Karl Christian van Nassau Weilburg in The Hague. Simon Fokke made a wonderful drawing of the occasion. In the middle you see the bride and groom, next to them Carolina’s brother William and next to him their guardian Ludwig Ernst Herzog zu Braunschweig – Wolfenbüttel – Bevern. When you take a close look at the drawing, in the left corner, it looks like the household of Carolina sits there and who is in the middle? A servant from Africa.

In 1817 Presto writes a letter to King William I, nephew of Carolina, that he was a domistique of Carolina and her brother William who he calls his benefactor.

There is one little problem, he does not write in which year…… but in his last letter (1821) he writes a year.

In 1762 he was a servant of Carolina her husband, The Prince of Weilburg.
On my Pinterestboard with +290 paintings with Africa servants, the child is mostly with the lady and when they are an adult, the servant is with a man. Is this what also happened here? Presto was 19 years old when he became the servant of the Prince.

Carolina and Karl leave for Germany in 1764 and what does Presto write in his first letter?
“That the petitioner in the year 1764, together with two of his countrymen Coridon and Citron came into the service of the late Royal Highness madam the dowager of Oranje Nassau and Vriesland”.
He is with Caroline her grandmother Maria Louise von Hessen Kassel, who dies in 1765 and Presto leaves the Court to live with Abraham D’Arrest sr, mayor of Weesp and a friend of William IV and William V.

The big question in my research is now: was Presto one of the boys given to Carolina in 1748?

During the funeral of Magdalena D’Arrest in October 1776 there is a riot in the church of Weesp between the Mayors Van Marken Nicolaasz and D’Arrest. In a notarial statement about the events there is also a reference to the ‘black servant’ of D’Arrest.
‘as when They were met by Lord Mayor D’Arrest, mentioned before, and his Son and Black servant”.

In 1776 there is a pamphlet written as a play in three acts about the testament of Magdalena D’Arrest. One of the characters in this play is for Presto, his name in this play is Marocco and he is the house-steward of Magdalena. The play can be read as an ebook via Google.

On the 7th of March 1777 between 4 and 5 in the afternoon on the street he quarrels with the heir of Magdalen about 300 guilders. He had heard that all the servants of Magdalena D’Arrest had recieved it.
‘the negro Presto, who works as a servant for Mayor d’Arrest at Weesp’

And by this notary deed I know they called him Presto, a music term. Did Anna or Carolina give him this name? They both were very good musicians. Händel said that Anna was his best harpsichord student he ever had and Mozart wrote 6 sonatas for Carolina.
In his last letter sept 1821, he writes he is 77 years and 7 months old, Carolina was born febr 1743.

On the 19th of October 1777 he was baptised in the Grote Kerk or Laurenskerk of Weesp and from that moment on. 33 years old, his name became Christiaan van der Vegt.
He stayed on an other 11 years with the D’Arrest family.

Annemieke van der Vegt's website is an exemplary achievement in the field of public history.